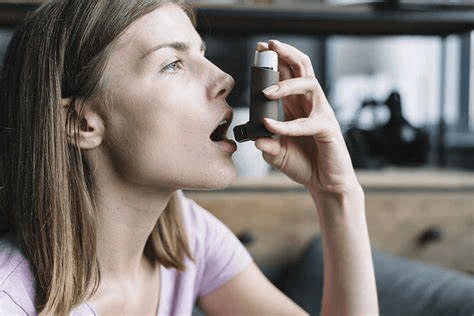 COPD or Chronic Obstructive Pulmonary Disease is a condition where airflow from the lungs is obstructed. In simple words, COPD is a group of conditions that makes breathing harder, and the condition gets worse over time. Emphysema and Chronic Bronchitis are two main chronic lung diseases affecting individuals. Let’s understand the meaning of COPD word-by-word:

Chronic – Chronic means the disease lasts for a long time.

Obstructive – Obstructive here means that the airflow from the lungs is obstructed or blocked, leading to extra mucus and swelling in the lungs.

Pulmonary – Pulmonary means that the condition is associated with the lungs.

In Emphysema, there is damage to the air sacs or alveoli. The inner walls of the alveoli weaken and rupture, resulting in large air spaces rather than smaller ones. The reduced surface area of the lungs leads to a decrease in the amount of oxygen that reaches the bloodstream.

During exhalation, the damaged alveoli don’t function normally, and the old air gets trapped, which leaves no room for the fresh air to enter. In most cases, Emphysema and chronic Bronchitis exist together. 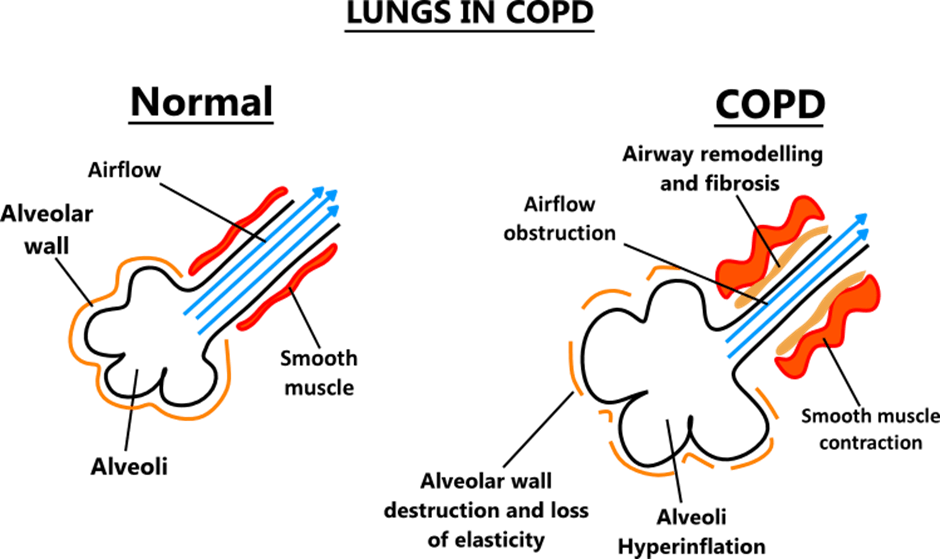 In Chronic Bronchitis, there is inflammation and irritation of the bronchial tubes. Bronchial tubes are the airways through which air reaches to lungs and comes out from the lungs. Due to the irritation of the tubes, there is more mucus secretion. The excess mucus and swelling of the tubes make it harder for a person to breathe. When the cough lasts for at least three months for two years in a row, the condition is called Chronic Bronchitis.

In bronchial tubes, there are hair-like fibres called cilia which help the mucus to move up so that it can be coughed out. In chronic Bronchitis, there is a loss of cilia which makes it difficult to cough out the mucus. Smoking also prevents the cilia from functioning normally, which results in mucus building up, causing damage to the lungs. 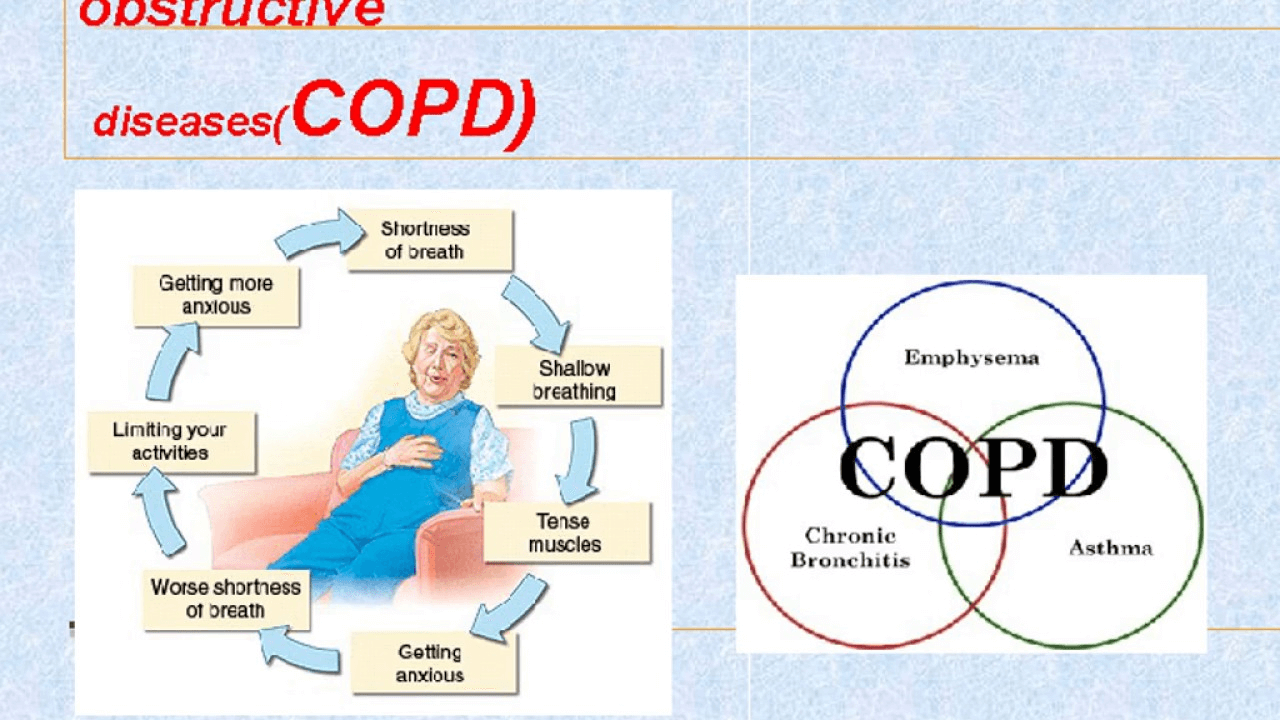 b. Tightness in chest

e. Increase in shortness of breath

People with COPD experience exacerbation which are the episodes in which their symptoms become worse than the usual days and persist for many days.

In developed countries, the main cause of COPD is tobacco smoking. However, fuel-burning in less ventilated homes is the major cause of COPD in developing countries. There are other irritants like air pollution, pipe-smoking, workplace exposure to smoke, fumes and dust that results in COPD.

In 1% of the people with COPD, the disease is caused due to a low level of a protein called alpha-1-antitrypsin. Alpha-1-antitrypsin is produced in the liver and is secreted in the blood to protect the lungs. The deficiency of the protein can cause lung disease, liver disease or both. Risk factors of COPD are:

a. Tobacco – Long term cigarette smoke is the most significant risk factor for COPD. The more you smoke, the greater is your risk of developing COPD. Apart from tobacco smokers, pipe smokers, cigar smokers, and second-hand smokers are also at risk.

b. Asthma patients – Individuals, already having asthma are also at risk of developing COPD. The combination of asthma and smoking increases the risk of COPD even more.

d. Burning fuel – In developing countries, people are exposed to fumes of burning fuels which make them susceptible to COPD.

e. Genetics – The deficiency of alpha-1-antitrypsin is an uncommon genetic disorder that may cause COPD. There are other genetic factors too that makes smokers more susceptible to COPD.

a. Respiratory infections – People with COPD are most likely to catch a cold, pneumonia and flu (Sethi, 2010). Such respiratory conditions may even make it difficult to breathe, resulting in more damage to lung tissue.

c. High blood pressure – COPD may cause hypertension in the arteries, which bring blood to the lungs. The condition is called pulmonary hypertension. Mild to moderate hypertension is a common complication of COPD (Chaouat et al., 2008).

d. Depression – Breathing difficulties can prevent you from doing the activities that you love, which results in depression. The condition itself can cause depression in some individuals.

1. Positioning and breathing techniques – In COPD, strengthening the muscles that use for breathing can make it easier for you to manage the shortness of breath. Breathing exercises can help you in staying relaxed when your symptoms escalate (Morrow et al., 2016). Here are the exercises that your therapist will recommend you:

a. Deep breathing – Deep breathing helps your body inhale the fresh air, and it prevents from air getting trapped in the lungs. To start deep breathing, sit in a comfortable position with elbows slightly back so that your chest can expand fully. Now take a deep breath and try to hold it as long as possible. Once you are exhausted, let the air come out and cough strongly. Repeat the procedure ten times every hour.

b. Pursed lip breathing – The exercise makes you calm and makes your breathing slow. Your therapist may suggest you this exercise every time you are short of breath. To do this exercise, you need to breathe in through the nose and use your abdominals to fill the lungs. 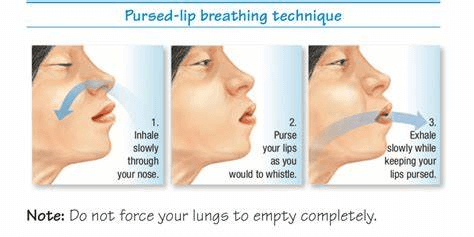 c. Diaphragmatic breathing – The exercise helps in making the diaphragm muscle strong. The diaphragm is one of the most important muscles that is used in breathing. In COPD, the air is trapped in the lungs and to expel it, outpatients use their neck, back, and shoulder muscles more than the diaphragm. For diaphragmatic breathing, you should lie down on a flat surface with bent knees and head supported. Now place one hand below your ribs and another one in the middle of your chest. Breathe slowly through your nose. Now tighten the muscles below your ribs and breathe through pursed lips. You should apply pressure from the hand that you placed below the ribs while tightening the muscles. Repeat the movement.

d. Controlled coughing – When you are constantly coughing, your airways may collapse, causing difficulty in breathing. Controlled breathing is a technique that helps in carrying the mucus through the airways without any difficulty. For this, you need to sit on a chair with your feet on the ground. You need to lean forward and breathe in through your nose slowly. Keep your arms folded across your belly. Now lean a little forward and exhale while pressing your belly using your arms. Open your mouth and cough a few times. Remember to keep your coughs sharp and short. Again, inhale gently through your nose.

The technique is great when you have mucus in your airways or after using a bronchodilator. 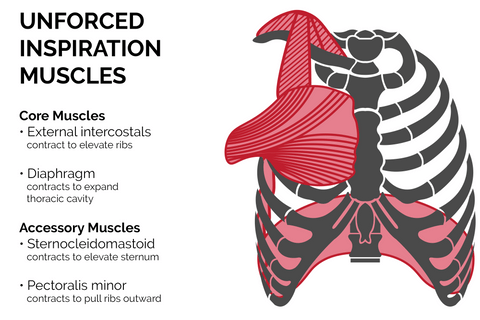 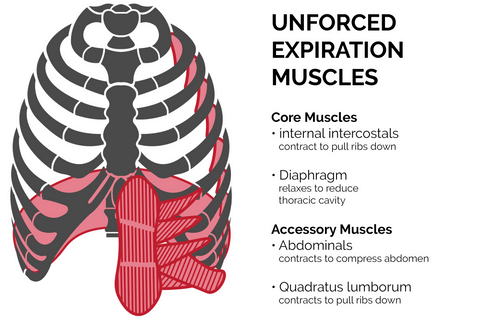 Usually, we use only 10% of our lung capacity. However, that can increase through inspiratory muscle training. Deep breathing needs energy, but it also causes more oxygen to enter the bloodstream. The common method used to train inspiratory muscle is resistance training which is called IPTL (inspiratory pressure threshold loading). A breathing device having a pressure loading inspiratory valve and unloaded expiratory valve is used to add resistance. The pressure is set according to your capacity and can be adjusted when you develop the technique.

3. Boost exercise tolerance – In COPD patients, dyspnea and muscle fatigue are the common issues that prevent a person from starting an exercise program. However, the best way to improve exercise tolerance and reduce breathlessness is by being active (Spruit et al., 2016).

You should always contact your healthcare provider before starting any new exercise program. Your therapist may first want you to take ETT (Exercise Tolerance Test), which determines your exercise capacity. Once the test results are interpreted, your therapist will give you the guidelines to start a new exercise program. Depending on your condition, your therapist may recommend flexibility exercises to prepare your muscles for activity and prevent injury, Strength training to increase the strength of your respiratory muscles, and aerobic exercise to strengthen the heart and lungs. Aerobic exercises may be difficult at first for COPD patients, but research shows that regular cardiovascular exercises can improve your breathing and reduce your blood pressure and heart rate (COPD Guidelines for Exercise & Pulmonary Rehab, 2017).

Chronic Obstructive Pulmonary Disease is debilitating; however, under the proper guidance of an experienced respiratory therapist from Progressive Care, you can improve your condition and lead a good life.