Crohn’s disease is a chronic inflammation of the gastrointestinal tract. It is a group of conditions that are named inflammatory bowel diseases (IBD). The condition is named after Dr Burrill B. Crohn, who discovered the condition in 1932.

Crohn’s disease can affect any part of the gastrointestinal tract from mouth to anus; however, it commonly affects the end of the Ileum and the beginning of the colon. The inflammation found in Crohn’s disease can leave the normal areas in between the patches of the inflamed intestine. Some people may confuse the condition with Ulcerative colitis; however, in Ulcerative Colitis, only the innermost lining of the large intestine is affected, and the inflammation of the intestine is not in the patchy form; rather, it is continuous.

1. Crohn’s disease can affect anyone at any age; however, it is commonly found in adolescents and adults of age ranging from 20 to 30.

2. Studies have found that about 28% of the people with Crohn’s disease have first degree relatives like a parent, sibling or child having the disease (Kevans et al., 2016).

3. Although the disease has a genetic predisposition, it is impossible to find who may get Crohn’s disease.

4. Though Crohn’s disease can affect people from all ethnic backgrounds, it is commoner in Caucasians (Basu et al., 2005). In recent years the rate of the disease has increased in Hispanics and Asians.

a. Pain or cramping in your abdomen.

i. Eye pain or redness

The symptoms vary with the location and the severity of the inflammation. Few studies suggest that living under stress can make your symptoms worse. Moreover, few people with the condition may find certain food that triggers their symptoms. 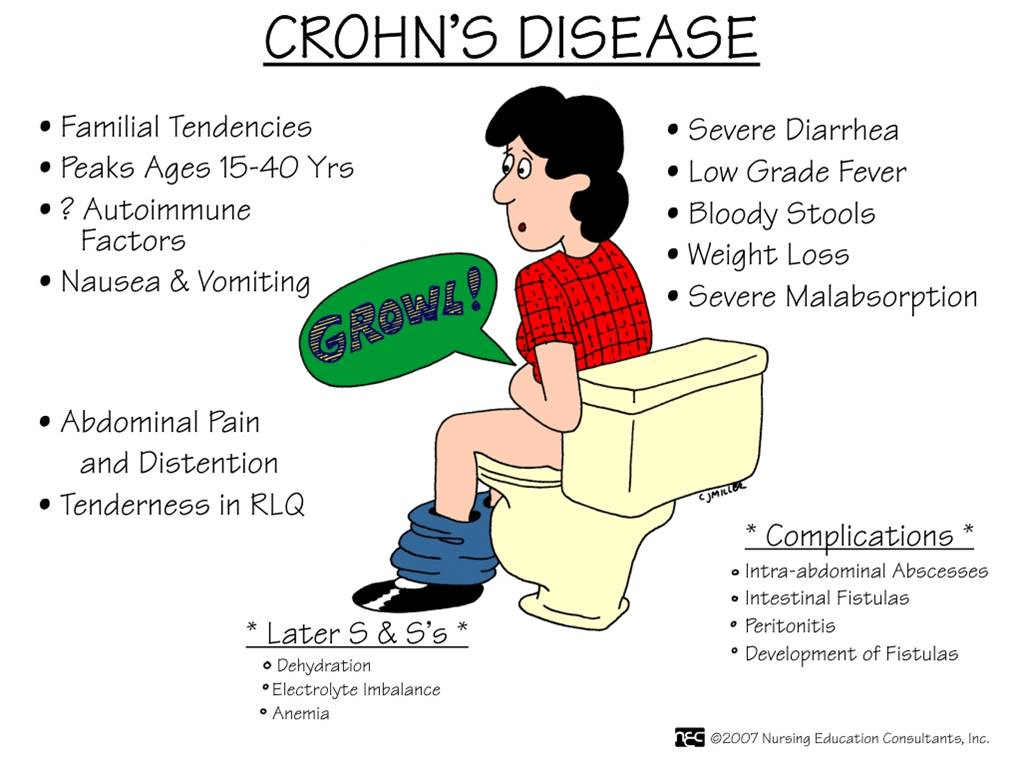 a. Genes – Crohn’s disease is found to run in families. Studies have found that if any member of your family has Crohn’s disease, the chances are high that you may develop the disease (Liu et al.,2014). Research is still going on to find the relation between the genes and Crohn’s disease.

c. Other factors – There are a few other factors that may trigger the symptoms of Crohn’s disease like:

i. Smoking can double your chances of getting Crohn’s disease (Somerville et al., 1984).

iii. It was also found that a diet high in fat can also increase your chance of developing Crohn’s disease (Hou JK et al., 2011).

a. Ileocolitis – It is the most common type of Crohn’s disease affecting the end of the small intestine (terminal Ileum) and colon. The symptoms include diarrhea, pain in the lower and middle part of the abdomen and weight loss. 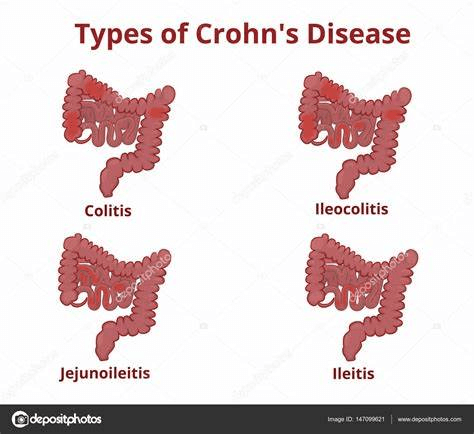 b. Ileitis – This type of Crohn’s disease affects the Ileum, and symptoms of the disease are similar to ileocolitis. In severe cases, there may be a few complications like fistulas and inflammatory abscesses in the right lower quadrant of the abdomen.

d. Jejunoileitis – In this type of Crohn’s disease, there is inflammation of the patchy areas of the Jejunum. Symptoms are abdominal pain and cramps, fistulas in severe cases and diarrhea.

e. Crohn’s colitis – In this type of Crohn’s disease, only the colon is affected, and the symptoms may include diarrhea, abscess, ulcers and fistulas around the anus, rectal bleeding, joint pains and skin lesions.

Though Crohn’s disease basically affects your GI tract, it affects your wellbeing and causes other medical issues like:

a. Loss of appetite

a. Fissures – These are the tears around the lining of the anus causing bleeding and pain during bowel movements.

c. Stricture – As a result of chronic inflammation, there is a narrowing of the intestine known as a stricture. 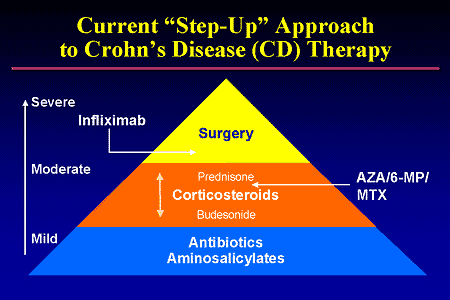 Medications used in Crohn’s disease are anti-inflammatory, corticosteroids, immune suppressors, Infliximab, and antibiotics. Along with it, there may be a need for laxatives, anti-diarrheal, pain relievers, nutritional supplements etc., depending on the specific symptoms.

Crohn’s disease is characterized by periumbilical pain, which is referred to as low back pain. There may be pain in the lower right quadrant and iliopsoas abscess that may result in the buttock, hip and knee pain. Some patients may come to a therapist with pain in the low back, hip and sacroiliac joint with no unknown cause. In such a case, it is important to screen for the potential causes and take the history of inflammatory bowel disease.

Patients with Crohn’s disease may also have low bone density, and there is a high risk of osteoporosis, so the therapist may provide education and prevention tips to the patients.

Hydration is another very important in Crohn’s patients, so a therapist should pay attention to any signs of dehydration like dry lips, dry hands, brittle hair and nails, headache and disorientation.

The patient may have emotional stress that could aggravate the prior symptoms. The therapist should accept the emotion of a patient, and while validating the disease, an effective exercise program should be prescribed for a better outcome. The exercises may boost the immune system and may reduce depression while improving the body image (Loudon et al., 1999). Additionally, physiotherapy may help you in coping with the unexpectedness of Crohn’s disease (Goodman CC et al., 2009).

To know more about the condition and to get yourself assessed, visit Progressive Care, where experts find out the best treatment course for you.