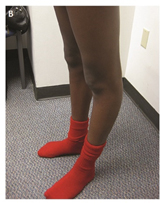 Equinus Deformity (or) Foot malformation in children with cerebral palsy is usual. The most usual malformation is called equinus, or plantar flexion malformation. In this condition, the foot points downwards.
The common disorders are

The most common malformation is equinus, which is present in the large majority of kids with CP at the beginning of standing and walking. This equines deformity is easily managed with daytime plantar flexion managing orthotics. Along with the orthotics, the physical therapist should be instructing the caregivers to stretch the plantar flexors several numbers of times a day. Non-stretching cast or splints should be used without having the knee splinted in full extension, or there will only be continuing stretching of the soleus muscle and further contracture of the gastrocnemius muscle.

The aim of treating equines deformity is to be conventional, and it is extremely important to avoid overstretching the plantar flexors, and the development of a severe contracture should not be neglected, as this also leads to significant long-term ailment from progressive cavus, foot, and ankle pain.