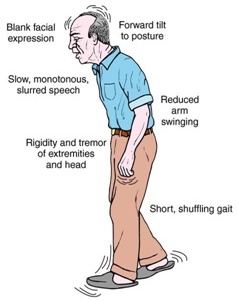 What is Parkinson’s disease (PD)?

It is a slowly progressive, degenerative movement disorder. Three classic symptoms are associated with PD: tremor, rigidity, and bradykinesia. The diagnosis of PD is usually made after the age of 55. Although PD is not considered fatal, the degeneration of various neurologic structures severely compromises performance of functional tasks.

PD is characterized by dysfunction in both voluntary and involuntary movements.

Occupational therapist helps in recover or maintain the daily living task or work skill of people with parkinson’s disease.

Check out these links for relevant information : Occupational therapy