What is this Iliotibial band?

The lliotibal band or the iliotibial tract is a thick fibrous band of connective tissue. It is present on the outer side of the thigh and runs throughout the length of thigh passing from pelvic bone and joins at the knee.

The IT band is made of dense fibers of connective tissue. 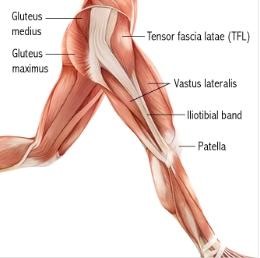 As it can be seen from the illustration, it is present from the muscles called tensor fasciae latae and gluteus maximus. To simplify, the muscles have tendons which connect it to the bone and tendons from the muscles mentioned above together make this Iliotibial Tract. 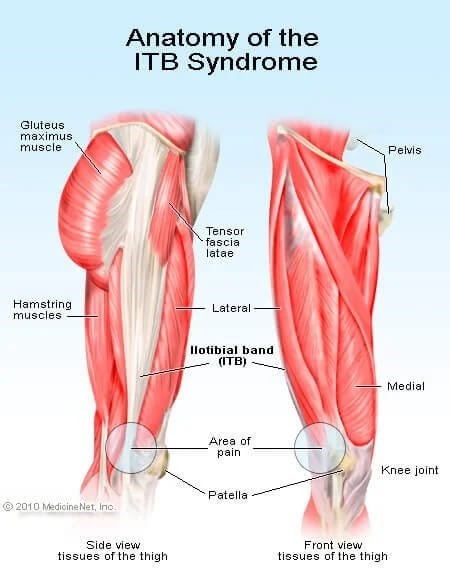 If you experience pain on the outer side of the knee and if you are a runner – professional or recreational; you may have iliotibial band syndrome, to affirm this you will need a Physiotherapy consultation. The IT band syndrome is often ignored and generalized as knee pain or misdiagnosed as arthritis or any activity related sprain.

Iliotibial band syndrome (ITBS) is a knee injury that is frequently seen among runners, cyclist, athletes and gym enthusiasts. This condition will present with pain and shall be tender on touch. If you are experiencing pain in knee, press on the outer side (lateral aspect) of your knee, feel the joint where two bones meet you may feel the foci of pain there.

The IT band syndrome is usually a non-traumatic injury. Often deemed as overuse injury seen in athletes, joggers and long-time runners. An underlying weakness of hip abductor muscles may result in it. An injury or inflammation to the bursa near it may also give raise to similar symptoms.

According to a study done Lazenby and Geisler in 2017, these researchers speculate that this is caused by injury to or compression of fatty tissue which is innervated.

signs and Symptoms this condition exhibits

Pain in the knee is present with a particular sharp pain on the outer side of the affected knee. Pain is felt the moment when person walks and their heel strikes the floor.

The pain in this condition spreads (radiating pain) and it can spread up to the outer side of the thigh or calf muscle.

The pain usually becomes worse while running downhill or climbing down the stairs. An audible snapping sound can be felt when the knee bends since iliotibial band snaps like a tight rubber band over the bone. Excess friction will result in inflammation and swelling on the outer side of the affected knee. Evident signs of inflammation will be seen in a chronic case. 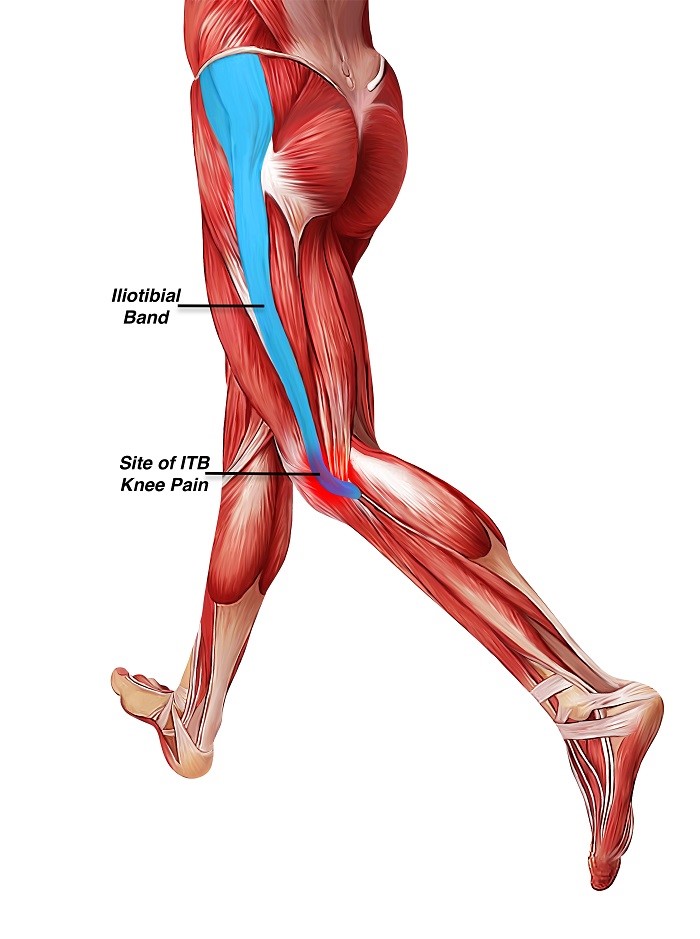 Diagram shows the site of pain while running 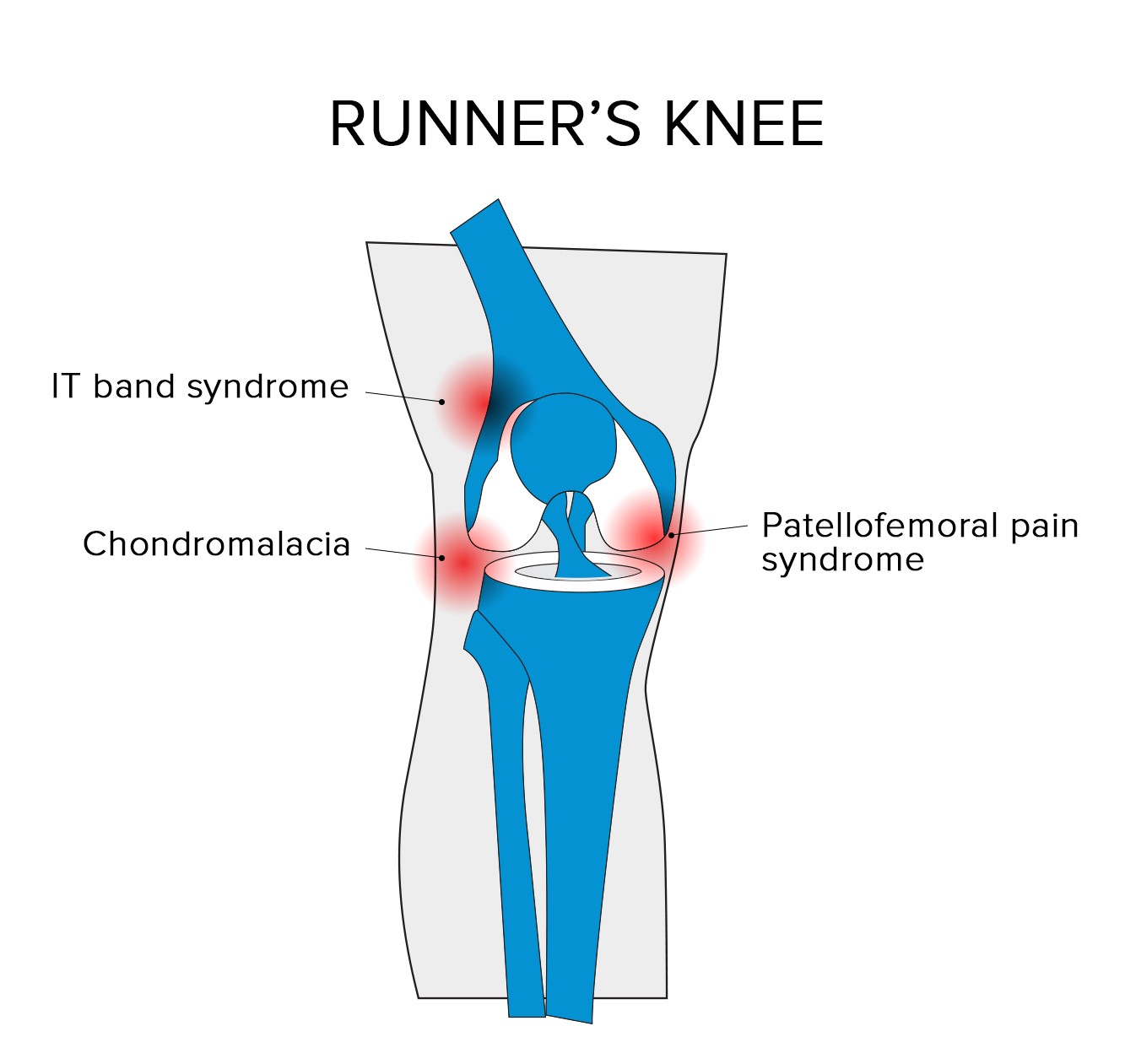 Diagram: how the site of pain defines and differentiate the disorders.

HOW DOES THE PHYSICAL THERAPIST DIFFERENTIATE ILIOTIBIAL BAND SYNDROME AMONG OTHERS?

This is a list of disorders which are quite similar to Iliotibial band syndrome. Only trained professionals can differentiate this from other syndromes.

Similar conditions to the IT Band Syndrome are-

10. Stress fracture of the thigh bone or the bones in lower leg.

11. Referred pain from any spinal disorder.

Physiotherapist performs some tests that can potentially differentiate and isolate the iliotibial band.

Some are as follows:

There is evidence found by Mucha, Caldwell et al in 2017 which states that there can be an exercise-related tenderness on the outer part of the knee more specifically on the lowest part of the thigh bone.

The affected person will observe an acute, burning fiery pain when pressure is applied on outer side of the knee, while the knee bends and straightens.

WHAT CAUSES THE IT BAND SYNDROME?

Now let’s discuss the reason behind the syndrome.

Inflammation develops in the IT band due to overuse injury. The surrounding structures also get irritated as a result of friction of the IT band. This is because the IT band keeps vacillating across the bony prominence of the thigh bone as the knee bends and straightens.

You may take an example of a cyclist who is cycling since a long time. The repeated motion of the knee eventually causes stress and makes the knee suffer pain. Thus, Iliotibial band syndrome is a cumulative injury which causes pain on the outer side of the knee during the activities like running, jogging, cycling especially when the heel hits the road/ pedal/treadmill.

Another reason why running is a very common activity associated with IT band syndrome is because of the landing of the foot.

You may be wondering what is the importance?

When running on an uneven ground, the foot may land on this banked ground awkward and overstretches the outer side of the foot thereby stretching the Iliotibial band suddenly, this mishap increases the possibility of injury.

When suddenly a person increases their activity levels, this can also lead to IT band syndrome.

Repeated Iliotibial band stretching or compression can lead to friction and irritation. The recent study by Mucha and Caldwell, et al supports this statement.

When the knee is straight the iliotibial band is lying in the front of knee. When the knee is bent in 30° angle the band moves behind the knee. So, there is a theory on IT band published in Journal of Sports medicine 2012 by van der Worp, van der Horst, et al that the friction occurs between the lower edge of the iliotibial band and a specific part of the outer side of the knee which is called the lateral femoral epicondyle.

Runners who run on uneven road and/or downhill can really challenge the IT band as it works very hard to keep the knee joint stable.

Running/ trekking repeatedly on hills can cause severe inflammation.

Exercises like in rowing machine and heavy weight lifting, most frequently seen in excessive squatting activities with or without weights.

Bicyclists also develop IT band syndrome with significant inflammation as sometimes they have improper footing on their bike pedal. The well-known “toe in” posture is a particular hazard while pedalling.

The reason can be that the toe clips which may be of faulty alignment. This will absolutely cause the foot to be rotated inwards and thus toe in posture. This can result in a posture known as bowing of legs. The bowed legs will automatically increase the angular alignment of the Iliotibial Band. As the IT band crosses the knee joint it results in friction and exaggerating the risk of inflammation.

HOW DO WE TREAT THIS IT BAND SYNDROME?

Iliotibial band syndrome is a cumulative disorder; so, we must immediately discontinue the activity which is causing pain. You can consult a Physiotherapist in case pain and if you are unable to walk and move then you must consult an orthopaedic surgeon.

1. IT band syndrome treatment is primarily focused on reducing the inflammation

Rest, ice application, compression, and elevation of the affected limb. 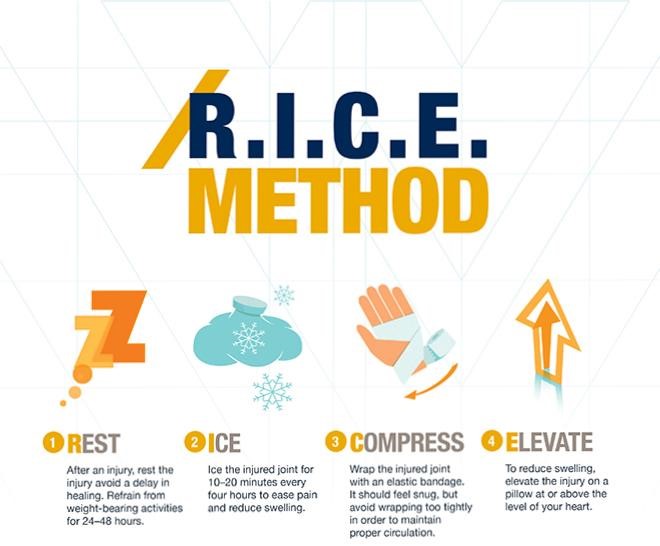 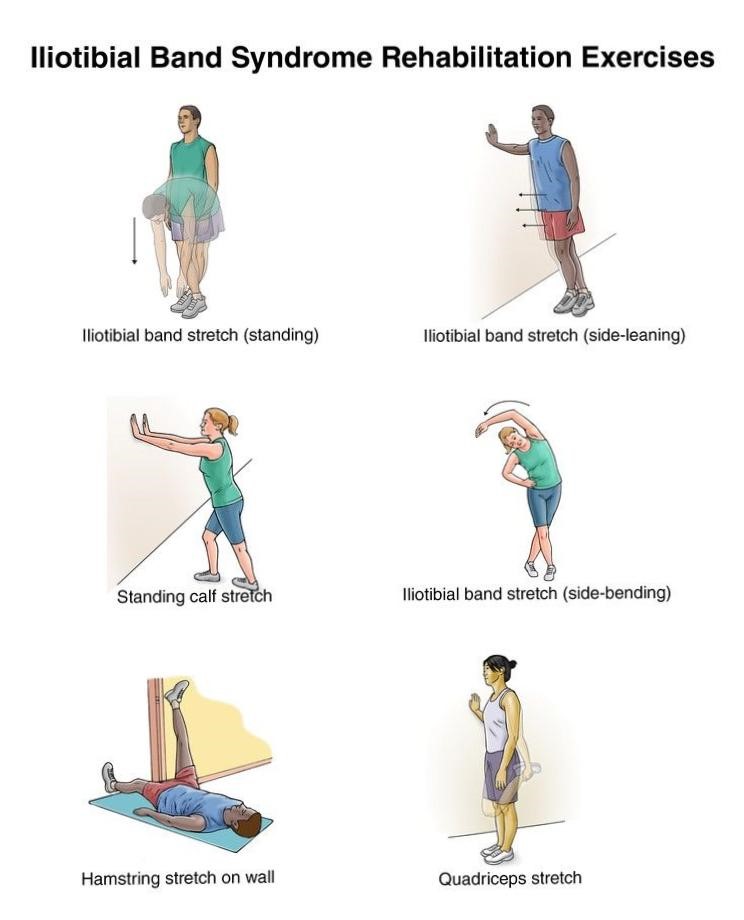 3. A physiotherapist can teach you the exercises, stretching, self-massage and will teach you how to use foam rollers for the IT band specific at the area of pain, swelling and inflammation.

4. Many people may only need the focus on flexibility and stretching.

5. Friction massage is also a good treatment for people who experience tightness and decreased movement.

This is mainly done on the IT band at the thigh bone, it will help immensely to break down stuck connective tissues and break down the scarring inside.

They will check your flexibility as well as study your gait by closely observing how a person walks, runs, or does cycling.

By doing this foot muscles will get screened and all the potential disorder can be ruled out.

Role of an Orthotist in IT band syndrome 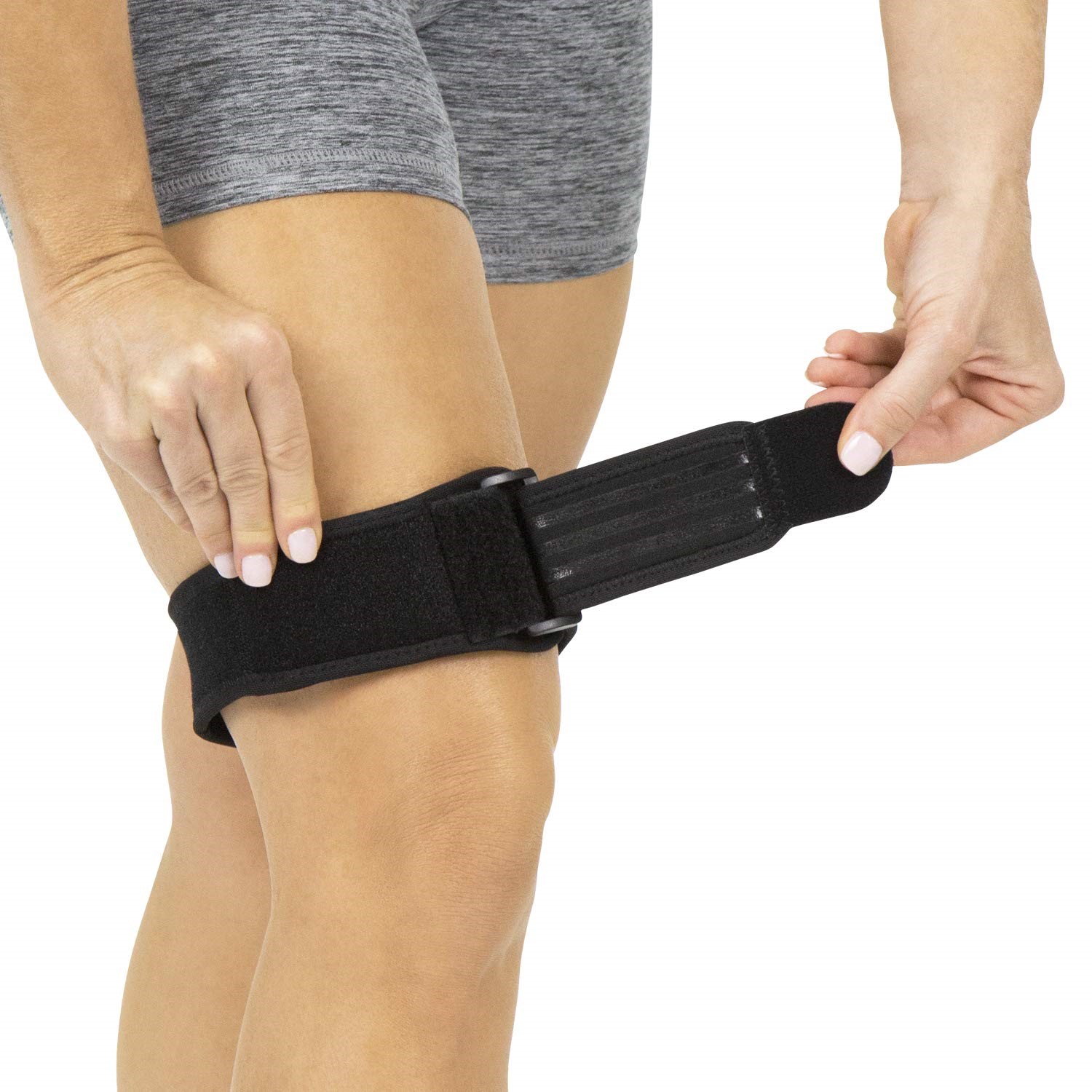 Used for compression of IT Band

Whether there is a problem in the person’s walking pattern,  or the way their pelvic bone tilts while walking, or a person may have a leg-length discrepancy. These minute details all contribute to  possible cause of IT band syndrome.

Talk to Physiotherapist or Visit an Orthopaedic if you experience any of these symptoms. Do not self-diagnose or self-medicate