International Day of Sport for Development and Peace – Apr 6th 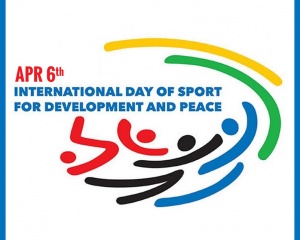 “We, at the United Nations know that sport is a universal language, uniting groups and nations across divides. Sport empowers youth, promotes good health and deepens UN values such as equality, mutual respect and fair play. Sport helps us in spreading messages of peace, driving social change. I urge all global citizens to join this growing movement and become part of our team to harness the power of sport to build a better world for all.”    – U.N. Secretary General Ban Ki-Moon
Sport has a unique power to attract, mobilize and inspire. Sport embodies the uniting principles of participation, inclusion and citizenship. As a universal language, sport can be a powerful tool to promote peace, tolerance and understanding by bringing people together across boundaries, cultures and religions. Its intrinsic values such as teamwork, fairness, discipline, respect for the opponent and the rules of the game are understood all over the world.
Sports activities have been increasingly recognized and used as a low-cost and high-impact tool in humanitarian, development and peace-building efforts. In grassroots projects throughout developing areas of the world, sport is used as a tool in short-term emergency humanitarian aid activities, in long-term development projects and in the social re-integration of children and youth affected by violence and war.
Creating opportunities for respectful interaction can result in increased familiarity and tolerance. It also allows individual players to find constructive ways to channel emotions, communicate effectively and work as a member of a team.
Since 2014, the S&D sector has been granted a UN recognised international observance day on 6 April,which recognizes the power of sport in promoting peace and erasing cultural barriers worldwide.Sport is a positive way of achieving goodwill, healthy competition and cooperation across all cultures.
Physical inactivity leads every year to an estimated 3.2 million deaths. This is why UNESCO has joined forces with the World Health Organization to combat sedentary lifestyles, starting with inclusive and equitable quality physical education at school. This calls for new commitment and resources from all actors – to ensure public policies, especially in the fields of health, education, urban planning, infrastructure and transport, work also with the private sector in the development of legislation, regulations and national plans for sports.
Call Now Button