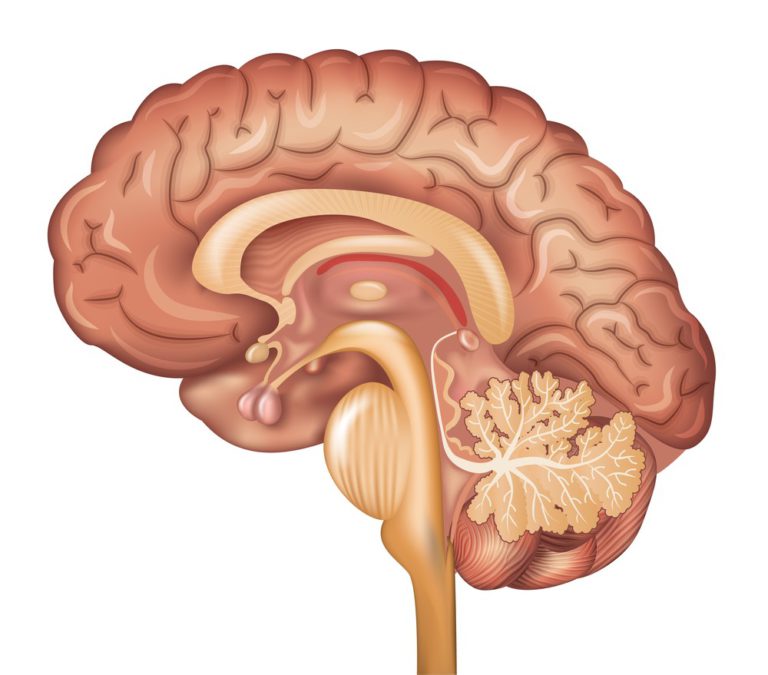 Progressive supranuclear palsy is a rare condition that affects the brain, which leads to problems with walking, eye movements, balance, and swallowing. The condition deteriorates the area of the brain responsible for coordination, balance, body movement, and other functions. The condition is also called Steele-Richardson-Olszewski syndrome. Progressive supranuclear palsy worsens over time and can further lead to life-threatening complications like difficulty in swallowing and pneumonia. The condition is not curable, so treatment mainly focuses on managing

The cause of progressive supranuclear palsy is unknown. However, it is considered as a type of tauopathy where there is abnormal phosphorylation of “Tau” protein leading to the destruction of important protein filaments of the nerve cells, causing their death. Tau is a type of protein that is naturally present in the brain, and it breaks down before it reaches high levels. The protein helps the brain cells to make contact with other brain cells. In people with Progressive supranuclear palsy, the tau protein is not broken and forms clumps in the brain cells called “neurofibrillary tangles” (Hauw, 1994). The severity and the symptoms of the disease depend on the amount and the location of the lumps.

The condition is also linked with the changes in the specific genes, but such faults are not inherited, so the risk to the other family members of having progressive supranuclear palsy is very low. Rarely, the disease is the result of the mutations in the MAPT gene (Young Im, 2015). The normal variations in the MAPT gene are associated with the high risk of developing supranuclear palsy.

The MAPT gene gives instructions to make Tau protein. This protein is present in the nervous system and is responsible for stabilizing and assembling the microtubules which make up the cytoskeleton of the nerve cell.

People with the condition develop different types of difficulties with movement, balance, vision, swallowing, speech and vision. The condition progresses gradually, so it can be mistaken as another more common condition. The symptoms worsen over time; however, the duration with which they progress varies widely. The signs and symptoms of the condition vary from person to person, and it majorly falls under five syndromes: 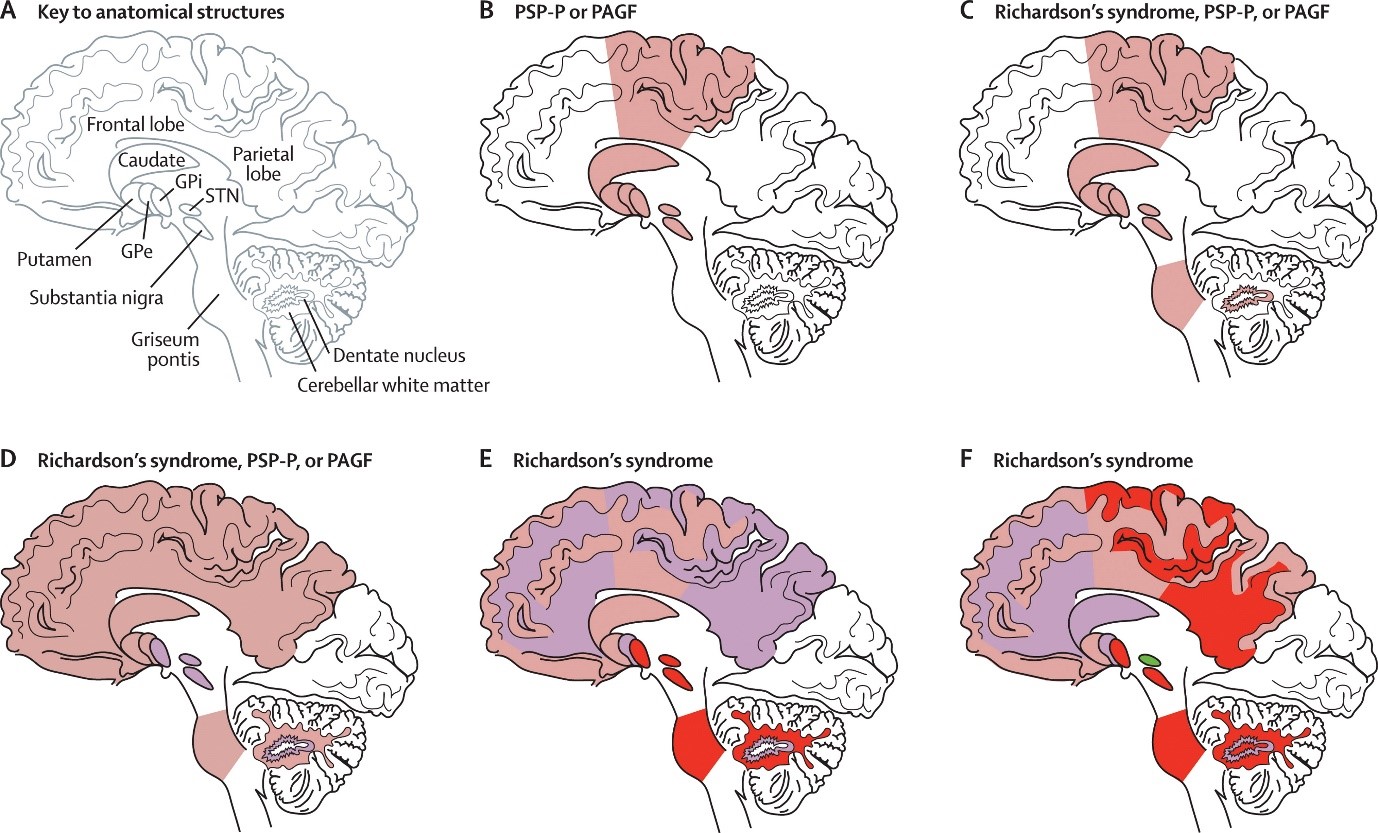 Richardson syndrome is the most common presentation of progressive supranuclear palsy, and it consists of balance and gait impairment, speech abnormalities, stary facial expression, impairment in cognition including forgetfulness, loss of interest in the activities that were interesting previously, depression, and irritability.

A very small number of people with progressive Supranuclear Palsy are actually diagnosed correctly, as they don’t show classic Richardson syndrome charecteristics. Many patients initially show muscle rigidity and tremor and are misdiagnosed as Parkinson’s disease.

With corticobasal degeneration (Dickson, 1999), patients show stiffness and loss of motor function in the upper limb. Rarely there is gait freezing and akinesia. Such patients show a problem with gait initiation, and they have a tendency to stop while turning.

There is also cognitive impairment in some patients, which resembles Alzheimer’s disease. The diagnosis of progressive supranuclear palsy becomes more certain when the disease progresses.

b. Stiffness in muscle predominantly in neck

e. Reckless behavior, along with a poor judgment 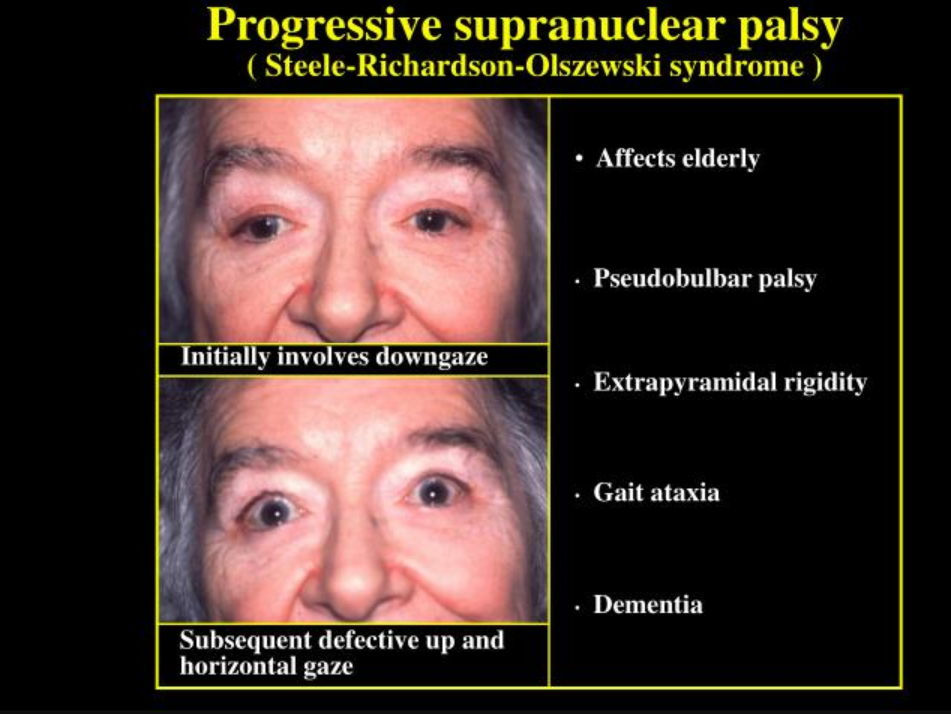 h. Problem in looking up and down

With time the symptoms of progressive supranuclear palsy worsen. Problems with mobility increase and so is the loss of balance. New symptoms that develop at this stage are:

a. Slow and slurred speech

g. Neck and back pain along with headaches

In the advanced stage, people with PSP begin to face difficulties in controlling the muscle of the tongue, throat, and mouth. Speech may become slurred, which makes it harder to understand. There may be dementia and problem with thinking and concentrating. However, the patient never loses his awareness.

With the loss of strength in the throat muscle, swallowing problems occur. Some patients may require a feeding tube to prevent choking and infections caused by small food particles and fluid in the lungs.

There may also be some difficulty with bowels and bladder. There may be constipation and problem in passing urine. Some patients complain of bladder and bowel incontinence.

a. Falling can cause fracture of the head and other injuries

b. Difficulty in sleeping

c. Swallowing difficulty causing choking and aspiration. Aspiration causes pneumonia which is the most common cause of death in people with progressive supranuclear palsy.

Progressive supranuclear palsy worsens with time, but it doesn’t directly get life-threatening. However, there is a high chance that the patient may develop serious complications like pneumonia and difficulty in swallowing. The patient may experience frequent falls due to which he may have head injury and fractures. With the right medical treatment and nutrition, the patient of progressive supranuclear palsy may live up to and beyond their 70s.

Complex diseases like PSP are shown to have benefited from aerobic exercises and motor cognitive goal-based approach (Clerici, 2017). Balance training can reduce the chances of injury after a fall and can provide the tools for maneuvering when the fall has happened. 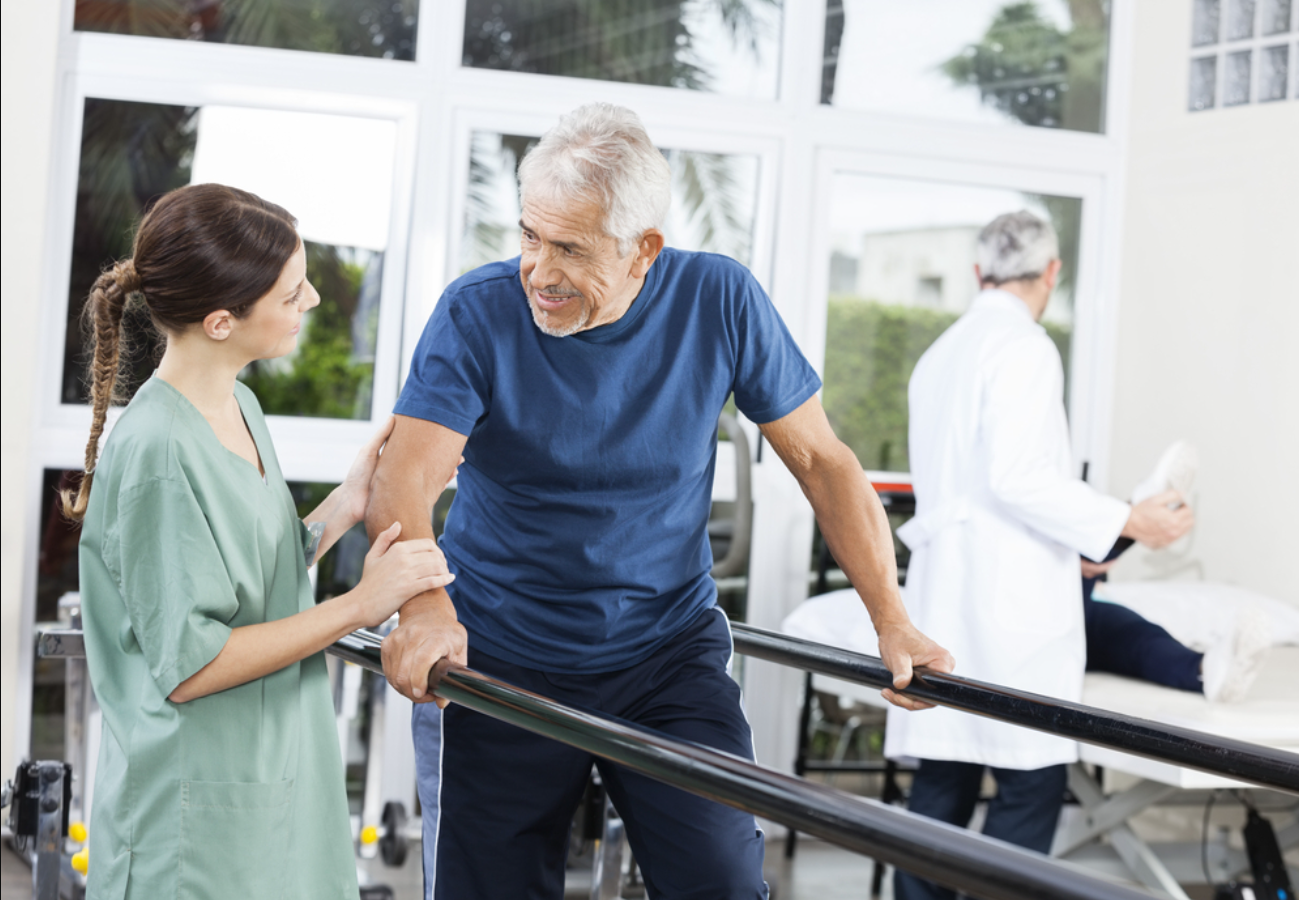 As there is no medication to treat the condition, patients are mostly referred to physiotherapy for symptoms management (Tilley, 2016). In most cases, physiotherapy treatment includes:

f. Tasks that are goal-oriented

There are special tools that make the life of people with progressive supranuclear palsy easier, for example- prism glasses to improve the vision and a weighted tool to prevent people with PSP from falling backward. When swallowing becomes hard, a feeding tube can be very useful, which provides the necessary nutrition.

A physiotherapist can suggest the equipment that can help people with PSP, like walking frames and the modified shoes that prevent falling ad slipping. A physiotherapist also plays a key role in reducing the risk of aspiration pneumonia by teaching the right breathing exercises.

An occupational therapist can also be very helpful in progressive supranuclear palsy as he can advise you on the ways through which falls and trips can be prevented. For example, bars can be placed on the sides of the bath to make it easier for the patient to get in and get out.

An occupational therapist can also detect the potential hazards in the home like slippery corridors, poor lighting, etc. He may also suggest shoes with built-up heels to prevent the individual from falling backward.

The speech therapist also plays a key role in managing the symptoms of progressive supranuclear palsy, especially dysphasia. He can advise you about the right aids that can help with the communication. He may also teach you different swallowing techniques to make swallowing easier.

a. Strong support from friends and family

b. Talk about the feelings and concerns with your doctor and therapist

c. Connect with the support group for yourself and the family members

Progressive supranuclear palsy affects the quality of life of the individual suffering from it and his near ones. With the help of experts in Progressive Care, the condition can be managed, and signs and symptoms can be improved.