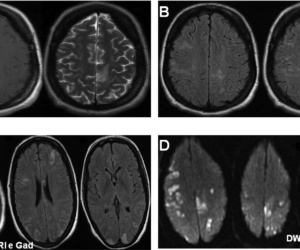 Definition: Central Nervous System (CNS) Vasculitis is among a family of rare disorders characterized by the inflammation of blood vessels, which restricts blood flow and damages vital organs and tissues. CNS vasculitis can block the vessels that supply the brain and spinal cord, causing potentially life-threatening complications such as loss of brain function, or stroke.1

Causes: The cause of CNS vasculitis is not fully understood by researchers. Vasculitis is classified as an autoimmune disorder—a disease which occurs when the body’s natural defense system mistakenly attacks healthy tissues. Researchers believe an infection may contribute to the onset of CNS vasculitis. Environmental and genetic factors may play a role as well.

Primary angiitis of the CNS (PACNS) is vasculitis confined specifically to the brain and spinal cord, which make up the central nervous system. Primary angiitis of the central nervous system (PACNS) is a rare and severe disease. It was first described by Harbitz in 1922 as an unknown form of angiitis in the CNS. Secondary CNS vasculitis usually occurs in the presence of other autoimmune diseases such as systemic lupus erythematosus, rheumatoid arthritis; or viral or bacterial infections.2 In general, CNS vasculitis is considered rare. In the case of PACNS, the disorder can affect people of all ages but generally peaks around age 50. It most often occurs in males.

Symptoms: The common symptoms of Primary angiitis of the CNS (PACNS) includes confusion, headache and personality change. Other symptoms are seizures, bleeding in the head, coma and vision loss. Occasionally patients can develop symptoms similar to stroke, which can involve a wide range of neurological symptoms, such as mobility and balance problems, speech difficulties, memory loss, hearing loss, cognitive problems, difficulties controlling arms and legs, fatigue, and bladder and bowel incontinence. Usually symptoms appear over several months but can occur quickly. Some forms of CNS vasculitis can closely mimic multiple sclerosis.

Diagnosis and treatment: Diagnosing vasculitis can be difficult, as some diseases have similar symptoms of vasculitis.  It is especially difficult to distinguish from non-inflammatory causes of vasoconstriction. The diagnosis of a CNS or PNS vasculitis disorder will depend upon the number of blood vessels involved, their size, and their location as well as the types of other organs involved. The diagnostic tests and procedures, including:

blood and urine tests to look for signs of inflammation (such as abnormal levels of certain proteins, antibodies and blood cells)

diagnostic imaging using computed tomography (CT) and magnetic resonance imaging (MRI) scans that produce two- and three-dimensional images of the brain, nerves and other organs, and tissues.  Scans are performed before and after injection of a contrast agent to determine if the contrast agent leaks from the weakened vessels.

Angiogram (x-ray imaging using a special dye that is released into the bloodstream) to detect the degree of narrowing of the blood vessel in the brain, head, or neck

Ultrasound to produce high-resolution images of the blood vessel walls and to measure blood flow velocity.

Clients with CNS vasculitis can present with serious neurological symptoms and impairments such as cognitive and behavioral changes, hemiparesis, sensorimotor deficits, speech and language deficits and movement disorders. Treatment for vasculitis typically depends on the organ(s) affected and involves drugs aimed at suppressing the abnormal immune system activity and reducing inflammation.  Duration of treatment depends on the type of vasculitis but usually long-term treatment is needed. Neurological changes can have significant impact on a client’s motor skills and function. Rehabilitation therapy can help to assess a child’s functional changes from baseline, assessment and therapy.

The present study primarily focused on discussing the impact of CNS Vasculitis (Primary angiitis of CNS type) on speech and language functions.

A 14 year old male came to a rehab clinic with a diagnosis of CNS vasculitis (Primary angiitis of CNS type), on 19th June 2019. Primary complaints reported were difficulty in speaking, walking, reading and writing. Caregivers reported that the client had an attack of brain stroke when he was 4 years old with recurring episodes of stroke once every two years; past MRI and CT scan reports revealed repeated infarcts in multiple areas of the brain, recent MRI of brain reveals infarct in right post lateral medulla. Genetic test was done and the DNA test reports reveal vasculitis is caused by homozygous  or compound  heterozygous mutations in CECR1gene and is diagnosed as Vasculitis, autoinflammation, immunodeficiency and hematologic defects syndrome (VAIHS). Psychological evaluation was done 2 years ago and the reports reveal Borderline IQ. Client is currently undergoing physical therapy treatment for impaired balance, poor muscle strength and incoordination. Client underwent detailed speech and language assessment.

Language: Client is able to comprehend one step verbal directions and can use simple two to three word sentences to express his needs. However, client often prefers to use gestures and facial expressions (non-verbal) to communicate.

Oromotor: Restricted movements of oro motor structures such as lips, tongue, and mandible resulting in impaired speech production. Client specifically showed difficulty in performing oro motor tasks such as protrusion and retractions of lips, elevation of jaw and tongue. Vegetative skills such as blowing and sucking are affected

Difficulty in reading and writing.

Linguist Profile Test (LPT): the client performed at an age equivalent level of 8+ years in the areas of receptive and expressive language. Phonology seems to be the least difficult, while syntax and verbal expression seem to be the most difficult.

The most affected areas are Tongue, Jaw and Lips. However scoring is low on tongue because of the spasticity and also the tongue noticeably deviated to one side. Lips slightly drooping and elevation on one side only. Overall speech intelligibility is poor because of spasticity in oral structures.

Speech therapy services started with three sessions per week and are being primarily focused on improving vegetative skills such as blowing and sucking and on oro motor strengthening of lips,

For lip movement and lip closure:  the lollipop is held just in front of the lips and off to one side, then purse the lips for a kiss and slide the kiss over to touch the lollipop.

For tongue movement: Lateral movement, upward and downward movements, tongue rotation was demonstrated. The client practiced them unison with the clinician, also an activity with lollipop by rubbing it around the client’s lips so that they’re sticky. Then he is asked to taste off with his tongue (not the lips).

For tongue lateralization: the clinician rub the honey/ chocolate in one corner of the mouth and then in the other.  The client is asked to lick it off both corners and then repeat to get the tongue moving from side to side.

Along with the activities, few techniques like phonetic Drill, Distinctive feature therapy, Minimal pair’s therapy etc. has been used

Client is also working on improving receptive and expressive language skills through various activities, and on pragmatic skills like greetings, requests and maintaining conversation etc.

The client is attending speech therapy classes since 3 months and progress noted for all the sessions. Overall speech intelligibility is improved for words.

Oromotor: There is a significant improvement observed in lip seal, extension and movement. Lateral movement of tongue is improved and upward, downward movements are still restricted. Jaw elevation is achieved but the movement is restricted.

Communication: He started verbal attempts when asked a question, but still using one word.

Due to recurrent episodes of stroke the client’s speech, gross motor and fine motor skills got affected. The client is advised to continue the Speech therapy, Physical therapy and Occupational therapy sessions and also to use compensatory strategies for better communication and livelihood.

Check out these links for relevant information : Neurological