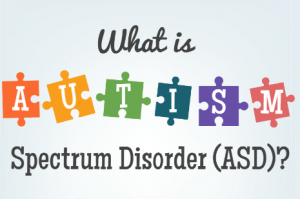 “Autism, or autism spectrum disorder (ASD), includes a broad range of conditions that are characterized by challenges in children and adults with social skills, repetitive behaviors, speech, and nonverbal communication. Autism is not a speech or language disorder. It’s a social communication disorder.

These children show delays in acquiring language, which ranges from the absence of functional communication to limited language development. Also, they show a problem in the use of language in conversation with people. They are often non-verbal when initially diagnosed by a Speech therapist. Any speech if present is usually limited and inconsistent. Their speech appears abnormal and is often described as machine-like, “monotonic,” speech

A child with autism spectrum disorder shows difficulty in communicating with people. Language development in most children with ASD is usually delayed and in a few children, there is no language at all.

Communication is a two-way process that uses eye contact, facial expressions and gestures as well as words, children with ASD don’t understand this. Some children with ASD develop good speech but can still show difficulty in knowing how to use language with other people. They might also communicate mostly to ask for their basic needs, rather than for social reasons.

They often use language in unusual ways to use while communicating and interacting with people. For example, echolalia is a common feature in children with ASD. This is when children imitate words or phrases without meaning or in an unusual voice. They might repeat someone’s words immediately or later on. They might also repeat words they’ve heard on screens (TV, Mobile phone, etc) as well as in real life.

Some other features like Neologism making up new words without or with meaning, which are called neologisms, they might say the same word again and again which is called neologism, they get confused while using pronouns and refer to themselves as ‘you’, and the person they’re talking to as ‘I’.

These ways of communicating might include: children with ASD prefer to use nonverbal communication. It includes pushing others towards the desired object, dragging others’ hands towards what they want, pointing, showing and shifting eye gaze – for example, a child looks at something he wants and then moves his gaze to another person, letting that person know he wants that object.

The major characteristics of autism are abnormal speech patterns which includes

Individuals with autism spectrum disorder may:

They have limited vocabulary and use them based on their utterances.

They are tuned to a routine and cannot adjust easily for the changes made.