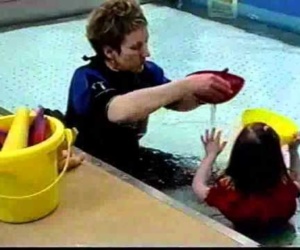 Don’t rock your body, don’t spin it continuously, why you are lining up the objects every time?” … Is your child listening to you?? If not… Then it is time to take Occupational Therapy.

So, what is tactile defensiveness??

It is the most common sensory modulation deficit .clients who experience sensory defensiveness tend to respond negatively to the sensation that is considered by most people to be harmless or nonirritating. A variety of behavioral and emotional responses are associated with sensory defensiveness. These behaviors generally reflect flight, fright or fight in response to noxious sensations.

The term stereotyped behaviors are also known as “self-stimulatory” behaviors.

Stereotyped behaviors are these behaviors involve repetitive motor patterns (e.g., rocking the body, spinning the body) and unusual object manipulations (e.g., rotate or turn objects, facing up objects). Behaviors such as abnormally focused affections (e.g., an sympathy for the letters), and other behavioral inflexibility (e.g., insisting that things maintain a certain sequence or aspects).

Both Tactile defensiveness and Stereotyped behaviors may be more problematic because it interferes and inflexible with a person’s adaptive behavior, daily life, and functional living skills. A child who engages in body rocking, for example, may be difficult to redirect to a more purposeful activity or maybe less available for social interaction. Intolerance of tactile stimulation may interfere with activities of daily livings such as bathing, nail cutting, hair cutting or tooth brushing.

Occupational therapists often provide services to children with autism and other developmental disabilities who have tactile defensiveness, stereotypical behaviors and other sensory, motor and perceptual limitations, cognitive problems, and related behavioral difficulties.

The occupational therapist helps children to cope with tactile sensitivity and become independent in daily life. Deep pressure is the type of enhanced tactile sensation most commonly recommended for decreasing tactile defensiveness, some clients prefer light touch or rapidly moving stimulation. It is not necessary to provide tactile and proprioceptive sensation to the whole body. Applying input to the arms and legs is usually sufficient to decrease tactile defensiveness

Check out these links for relevant information : Occupational therapy