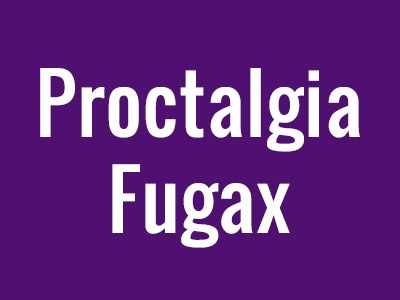 Proctalgia fugax approximately affect 4 to 18 percent of the population. However, only 17 to 20 percent of patients report their indicating factors to a physician. Although proctalgia has been reported in adult patients varying from 18 to 87 years of age, it usually affects individuals between 30 and 60 years of age. Proctalgia fugax is more common among females as compared with males

The indication of proctalgia fugax are muscles spasms in or around the lower part of rectum or in or around the canal of the anus. Proctalgia fugax isn’t known to have certain triggers. However, some studies Trusted Source have shown that it may be caused by an issue with the pudendal nerves. It usually happens after an injection course for hemorrhoids called sclerotherapy, or after a vaginal hysterectomy.

Other possible triggers may be:

The pain or spasm happens suddenly, and usually without caution. The pain can be severe and will remain for only a few seconds, although it can last up to 30 minutes in some cases. These event may be severe enough to keep you home from work. They may restrict your other activities until the event is over.

The pain will usually stop on its own. There can be long periods of time between spasms.

The pain or spasms usually starts at night and may be painful enough to wake you from sleep. They can also occur during the day

Once other conditions have been ruled out as the source of your pain and discomfort, your doctor will be able to diagnose proctalgia fugax.

Check out these links for relevant information: Pain
management