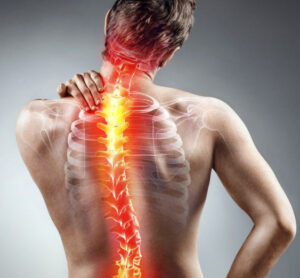 Scoliosis is the sideways or lateral curvature of the spine in the upright position which occurs most often during the growth spurt just before puberty. The lateral curvature is usually accompanied by some rotational deformity.

It is also termed as a three-dimensional deformative abnormality of the spine. Its defines by the cobb’s angle of spine curvature in the coronal plane and often accompanied by the vertebral rotations in the transverse plane. Less than 40% of the curvature can be treated by physiotherapy more than 40% require surgery.

It is caused by conditions such as cerebral palsy and muscular dystrophy; the cause of most scoliosis is unknown. About 3% of adolescents have scoliosis.

It can affect any part of the spine, but the most common regions are at the level of the chest and the lower back. It often appears in children most. In many cases, treatment is not necessary as the curve corrects itself with growth. However, based on the age of the child and on the degree of curvature, a combination of bracing and physical therapy is often recommended.

In many cases of scoliosis are mild, but some specific spinal conditions continue to get more worsen as the children grow.

Severe scoliosis can be disabling. More the spinal curve, the greater the reduction in the chest cavity making it difficult for the lungs to function properly.

A very small number of individuals with scoliosis may require surgery. Children’s who have mild scoliosis are monitored closely, usually with an X-ray, to see if the case is getting worse or not. Some children’s will have a need to wear a brace to stop the curve from worsening more further while others may need surgery to keep scoliosis from worsening and to straighten severe cases of scoliosis.

Most of the time the cause for scoliosis is unknown so it’s termed idiopathic scoliosis.

In most often affects girls. Some people are likely to have curving of the spine. During growth spurt the curve usually gets worsen.

Other types of scoliosis are:

Signs and symptoms may include:

Many individuals suffering from scoliosis will tend to have a mild disorder, scoliosis may cause some complications including:

It depends on many factors:

Many individuals with idiopathic scoliosis need not require any treatment, but should have a routine checkup with the doctor for every six months.

If you are still growing your doctor may advise you to use a back brace to support your spine due to which you can avoid further curving of the spine, theses brace work best in individuals over 10 years of age.

Braces due not work for individuals who have neuromuscular and congenital.

Surgery may be required if the spine curve is getting worse very quickly. The treatment should also include emotional support and physical therapy.

Casting instead of bracing is sometimes used for infantile scoliosis to help the child’s spine to go back to its normal position as it grows. This can be done with the help of plaster of Paris. The cast are attached to the individual’s body and will be worn throughout the day. As the child grow regularly the cast is changed frequently.

If the individual has mild to moderate the bones are still growing the doctor may recommend you to use a brace to prevent the further curvature but it will not cure or reverse.

They are two types of braces used for scoliosis:

Routine scoliosis screening is now done in schools and such screening has helped many individuals to detect early.

Check out these links for relevant information: Neurological physiotherapy