What is Mirror Therapy: Characteristics & its Treatment Analysis 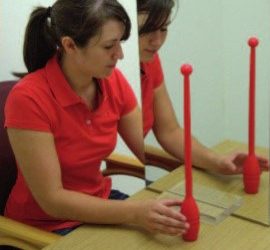 Mirror therapy (MT) is a simple, economical and valuable method for enhancing motor recovery in post stroke hemiparesis. The technique was first introduced by Ramachandran and Roger-Ramachandran to manage phantom sensations among the subjects with a unilateral amputation. The technique utilizes the mirror-illusion created by the movement of sound limb that is perceived as the paretic limb.

Hemiparesis, or unilateral paresis, is weakness of one entire side of the body (hemi- means “half”). Hemiplegia is, in its most severe form, complete paralysis of half of the body. Hemiparesis and hemiplegia can be caused by different medical conditions, including congenital causes, trauma, tumors, or stroke.

The characteristic property of a mirror is to reflect an image after altering its right-left orientation in humans, the movement of right side of the body is primarily controlled by the left brain, and vice versa. The mirror feature and the brain behavior collectively form the concept of MT.

The concept allows an individual to perform the movements of an unaffected body part in front of the arranged mirror-box while hiding the affected part. The technique induces a visual illusion that appears to mimic the movement of the paretic part.

The perception, more than being a simple feedback mechanism, has been found to enhance motor recovery of the impaired body side.

In post stroke hemiparesis, MT may augment the excitation of ipsilateral primary cortex associated with movements of the impaired limb. Further, the contralateral   primary motor cortex may form new pathways for movement of the affected limb.

The neural mechanisms leading to the favorable improvement are components of a complex phenomenon that need to be explored and comprehended Multiple MT sessions improve laterality index of the primary motor, premotor and supplementary motor areas of the ipsilesional hemisphere.

Check out these links for relevant information: Neurological physiotherapy