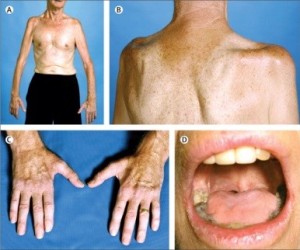 Motor neuron disease (MND) is a progressive disorder of the upper and lower motor neurons of the brain. This ends in muscle weakness, often with wasting of the muscles that are affected. It is likewise called ALS(Amyotrophic Lateral Sclerosis)

ALS is inherited in 5 to ten percentage of instances. Sometimes there’s no acknowledged motive, different instances seem to occur randomly. This condition occurs in the ratio of 1.5:1 for males and females accordingly.

Possible causes of ALS consists of :

Various genetic mutations can lead to inherited ALS, which seems nearly identical to the non-inherited form. The gene for familiar ALS is localized to chromosome 21

People with ALS typically have better than normal tiers of glutamate, a chemical messenger in the brain, across the nerve cells in their spinal fluid. Too an awful lot glutamate is understood to be poisonous to some nerve cells.

Disorganized immune response: Sometimes someone’s immune device starts attacking some of his or her frame’s own regular cells, which may also lead to the death of nerve cells.

Stretches should be done regularly which helps to prevent stiffness and pain which in turn decreases the intensity of muscle cramps.

These types of exercises are not recommended. Muscles that are already affected by ALS will not get strengthened when exercised by using weights and may also lead to more weakness of the affected muscles.

Cardiovascular fitness can be increased by increasing endurance and muscle efficiency